I have recorded a stand-alone audio file and now I want to match it up with a slide deck video file from Powerpoint, but I need each slide to be a different duration. To do this on a Mac, I learned that I have to do the following:

1. Go to Slide Show and UNCHECK the "Use Timings" feature.

2. Go to Transitions and Check and Edit the time in the "After" section to match the number of seconds desired for that slide (do this for each slide). 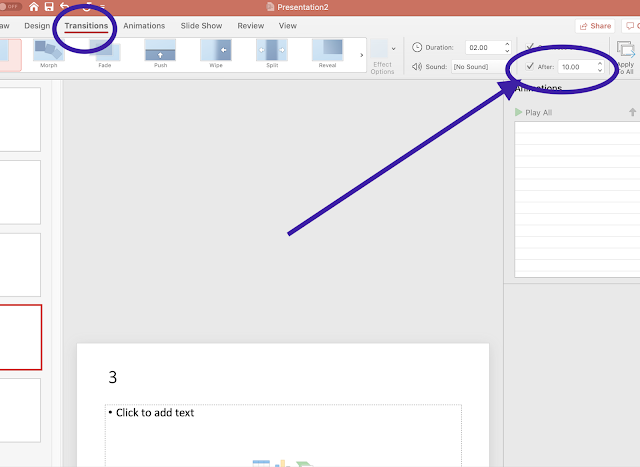 3. Go to File > Export > File Format > MP4 (or MOV) and make sure the "Use Recorded Timings and Narrations" IS checked and then change the "Seconds spent on each slide..." to 1 second. If you then review the video file, each slide should play for the exact number of seconds that were designated in the "After" field above. 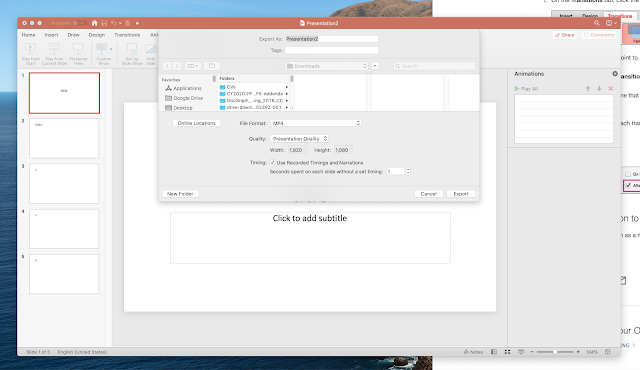 My piece on the challenges and failures of the US healthcare system is being featured on the front page of Medium today. Would love to hear your feedback, thoughts, and stories. 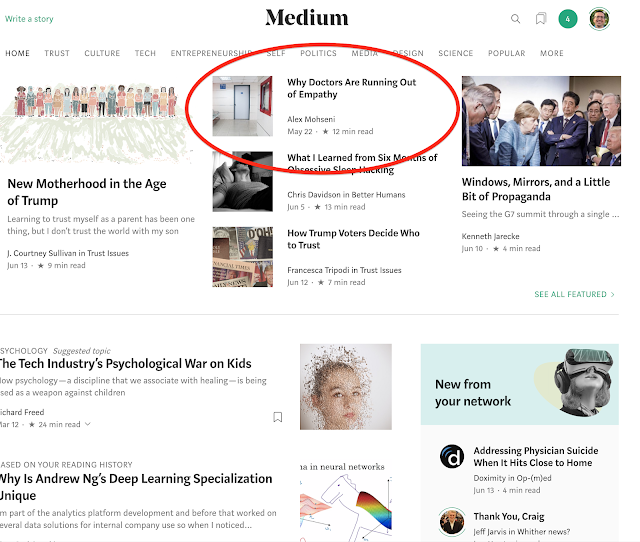 I'm an idiot, so this took about 6 hours for me to figure out, but apparently many people have not been able to figure this out, and I could not find a complete and working solution online anywhere.

If you want to be able to upload a file to Dropbox from Zoho Creator, you have to create a custom function like below (here I called the function "Dropbox", under namespace "Create"). In the function, the ID is being passed to it from the underlying form entry.

This uses v2 of the Dropbox API. You can get your Dropbox token and use the very helpful Dropbox API  Explorer here:

The key thing that was difficult to figure out and is not well documented is that the function toString() is necessary because Dropbox is expecting JSON and although the variable "data" above looks like JSON, it is not.
at February 17, 2018 No comments:

Monkeylearn.com is an awesome tool to help noncoders perform machine learning algorithms (for Natural Language Processing, etc...). The challenge is that the regular Monkeylearn integration in Zapier does not give you all the API data that you may want. For example, the Extract tool only gives the extracted keywords, but not the relevance, nor the position in text.

So, if instead of using the Monkeylearn zap in Zapier you build your own custom POST request, then you can get all the regular API output in JSON format. Make sure to choose "Custom Request" in the Webhooks by Zapier zap, NOT "POST". Once you are in the "Custom Request" zap, then choose POST as your method.

The image explains all the steps: 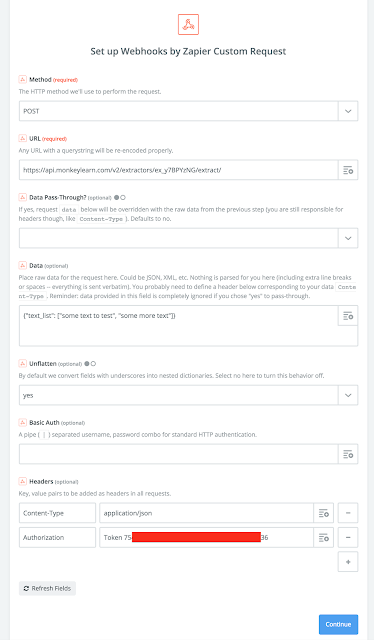 Artificial Intelligence in the Healthcare Arena: Implications for Emergency Medicine

This is really interesting. Elon Musk has another company called OpenAI, an artificial intelligence company. OpenAI built a neural network that was designed to teach *itself* how to play a very difficult video game and then the AI played against the best players in the world on stage in front of millions of people.

What’s really interesting is that the AI used strategies that the humans had never considered and could not even initially understand.

The implication for the ER is really interesting. Optimizing ED workflow is really a “game” in the same sense - you have two teams (providers/nurses/techs vs patients), with limited resources and functions, and each side has specific goals (for patients it is to get out quickly and have their healthcare issue resolved, for hospitals/doctors it is to keep the patient alive and get them out as quickly as possible by using the fewest resources).

Imagine if somebody created a video game that mimicked the people, forces, goals, and parameters of the emergency room, and then created an AI bot to play it, in order to figure out the best strategy to "win." That strategy could then be studied and learned from by humans.

For those who are naive to the challenges of Emergency Medicine, here are some of the huge problems in our specialty:

1. How should one staff?

How many doctors and APPs (Advanced Practice Providers, i.e., physician assistants) should you staff and at which hours? It depends on the volume and acuity of patients coming in, but you can't predict that accurately enough, so your best guess is usually based on averages seen in previous months and years.

2. Should you have more doctors, or more APPs, and in what ratio?

APPs are less expensive than doctors, but need oversight and have a reputation for ordering too many tests (although there are plenty of doctors who are guilty of that as well).

3. Should you pick up the next new patient, or discharge one of the patients who is ready to go?

This is a fascinating question that requires knowing a few other variables to solve properly (Single coverage site? Acuity of the next patient? Other doctors twiddling their thumbs?)

How to connect Google Sheets to live Medicare data

This is pretty cool. Medicare/CMS posts a lot of their data in two main websites for public consumption:

I don't know why these two are separated, but it does seem like they host two separate datasets of healthcare data.

One can connect Windows Excel to an OData feed from Medicare/CMS, but I can't figure out how to do it with Mac Excel '11 (I don't have a Windows computer). I prefer using Google Sheets anyways, so I wanted to find an easy way to connect Sheets to Medicare/CMS data.

Here's the technique I have found, and please let me know if there is a better way:

1. First, access the table of data you want. For me it was this one:

2. Because these tables are usually massive, you will probably need to login and create a saved view of a subset of the data.

Here's the subset of data I created, where I did a search for "Mohseni": 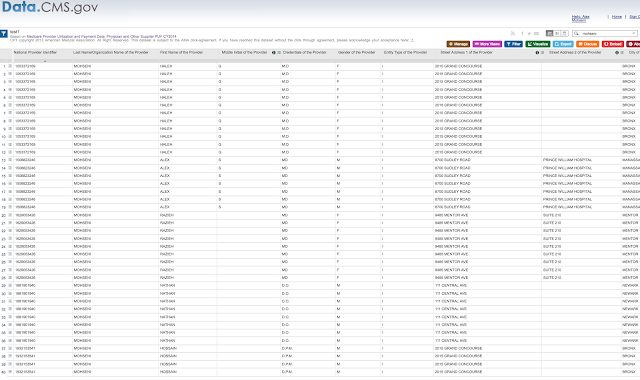 4. Go to Google Sheets and use the following function:

... and put your url that you just copied in the url spot.

Now, every time the data is updated, your Google Sheet will update as well.

This process will not work if your data set is too large.
at September 11, 2016 No comments:

How to track CME - guest post published on Knack blog

I am happy to announce that my detailed post on how I built CMElog.org using Knack, Zapier, Dropbox, Mailchimp, Mandrill, and Google Drive has been published on the Knack blog: 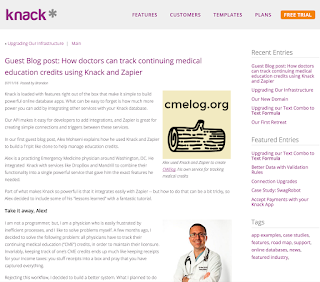 In this post, I dive into details of how to use Zapier to build automated services, like CMElog.org, in which medical providers' continuing medical education credits can be automatically extracted, identified, copied for back up, organized, and accessed.
at July 15, 2016 No comments:

I have recorded a stand-alone audio file and now I want to match it up with a slide deck video file from Powerpoint, but I need each slide t...

Emergency Medicine and Telemedicine Physician.
Technologist and Data Lover.
Tech writer for EM News.
Posts are my own and do not represent anybody else's views.
LinkedIn @amohseni